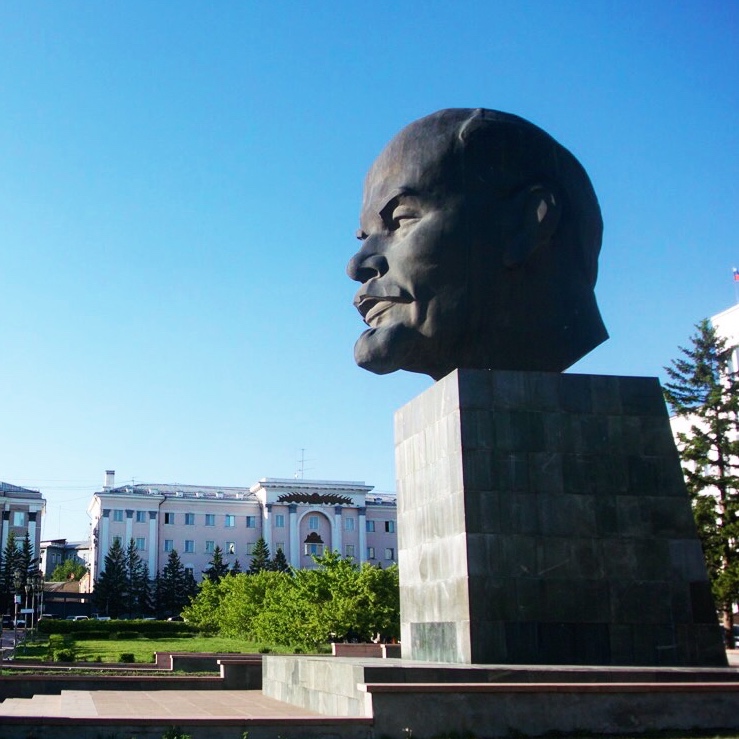 Ulan-Ude, May 29— I was given a charger and insight into the Russian mind today. As it happens, I also learned a life lesson.

Young Russians run the hostel here. Small, skinny people who seem to have neither fear nor uncertainty about themselves. I see two, a guy and a girl, both in their twenties, and I cannot tell if they’re married or involved since I do not see them together though they occupy the same room during their respective shifts.

The girl is the one who answers my ringing and is gracious and pleasant though it is early and I’ve clearly woken her. She doesn’t mind since I’d written ahead. Knowing my train number and expected hour of arrival had allowed her to mentally calibrate her internal alarm. “Russian trains are never late,” she says.

She conducts the quick hostel tour in a whisper since the guests are still asleep. A kitchen with hostel staples: bulk tea, powdered coffee, non-refrigerated milk, jam jars with jam levels so low you need to put your whole hand in the jar to scrape the bottom with a knife, and plastic bags steamed up with fresh but cheap bread. Two bedrooms, the doors of which are closed. Two bathrooms. A living room. Its linoleum floor is a spill of coffee, the sitting chairs like musty, over-sized teddy bears, and the design of the blankets that cover the two sofas appear to be a bad cross of a topographical map and both leopard and tiger prints. A map of the world is on the wall along with an invitation to place a pin on your home. No pins are on San Diego. New York has three, and I choose to pin it though it’s a place I’d rather not have to see again. All the continents are scarcely pinned. Africa has one.

There’s a note on the wall stating that the largest bust of Lenin in the world is in Ulan-Ude. “It is perhaps strange to have a large head of the founder of a bad period of our history that killed many millions, but this is our history and we cannot change it. We are proud of our statue!” Apparently, during the winter, the snow’s melting pattern leaves him with a white yarmulke.

The hostel has sanctioned an unofficial “best selfie with Lenin” contest. A gallery accompanies this contest. Tacked to the wall are photos: a woman holds a map and the camera’s perspective is such that it looks like Lenin’s head is resting on her shoulder. In another photo, a man is jumping over the head, appearing to use Lenin as a pommel horse. There is a surfeit of picking Lenin’s nose photos or eye-to-eye lovingly staring photos.

Still before breakfast, the hostel is changing shifts, and I realize my phone charger does not have the right prongs for a Russian socket.

The new hostel worker is a boy with loose blue jeans and a white t-shirt. I was told to not expect Russians to be affable, and this boy does not upset that expectation. I introduce myself, mention my charger predicament, and ask where I might buy a replacement. He writes four recommendations and then we discuss why Russians have their stereotype of sternness.

“Because Americans ask a stranger, ‘How are you?’ A Russian cannot ask this. A Russian would run away from you if you asked him this, he will think you are crazy or rude for asking. He would never tell you such personal information. Only closest family and friends can ask because we always answer with the truth. Americans would respond, ‘I am doing good’ when they are not doing good. Explain this to me?”

“I think we believe that taking an interest in someone else’s day is polite.”

“But then you do not want the truth in response. There is no politeness in wanting a lie.”

“Any other questions I should know are off limits?”

“Is talking about politics in Russian considered rude?”

The list of stores is an excuse for exploration. Until 1991, Ulan-Ude was closed to foreigners. Opening it did not increase the world’s cache of need-to-visit cities. There is little allure here other than the streets Kuybysheva and Sverdlova.

Old, riparian streets built in the angle made from the confluence of the Selenge and Ude Rivers, they are exemplars of outmoded Siberian merchant wealth. There was no building material in the area other than wood, and trading networks weren’t so extensive that a home facade could be detailed with some Mediterranean or southern Asiatic stone or precious metal. Thus, the wealthy relied on artisans to imbue their homes with status. The result is these streets lined with dark-wood homes with window panels carved like detailed Rorschach tests. Drapes of narrowly chiseled wood descend atop transoms. Dormers and gables that are painted robin blue have the fragile intricacies of snowflakes. But the streets have more indications of abandonment than life.

Before struggling with finding a charger, I struggle with finding lunch. Somehow every other city in the world but here has found a way to let a pedestrian know a certain building holds a restaurant or cafe. Innovations such as windows or open-air seating have lead the way. Ulan-Ude is obtuse to these: windows are too tinted to see through and there isn’t a street table in sight. Obviously still new to Cyrillic, I’ve yet to deduce the very obvious-in-retrospect fact that “кафе” means cafe. A bit desperate, I make guesses on places and just walk in. This game ends after I walk into my twelfth jewelry store

Adding to my struggle is the heat and the tantalizing frequency of ice cream vendors. Newer for me are the kvass carts, which are more frequent. These carts have yellow tankards that resemble oil transportation. The women employed have lips sucked into their mouths for want of dentures. The drink—kvass—is sour, fermented from rye bread and low enough in alcohol that kids have it.

I’m pointed to a cafe. I want a salad since I’m still expunging a week in Mongolia and just need fiber. “Salat Olivier,” appears to be what I’m after: the cheapest salad on the menu, I assume it’s just the owner’s name and straight and simple garden greens. I am quite, quite, quite wrong. Salat Olivier, had I ever bothered to open a 1970s cookbook I would have known this, is a Russian classic, a viscous cream of mayonnaise, minced celery and carrots, cut hard-boiled eggs, pickles, and cubes of boiled ham.

I fail lunch and my phone errand. Though I do get to explore a labyrinth of many-floored indoor shopping malls which are empty but for green water fountains and pale, loud youth.

Back at the hostel, I tell the boy I’ve had no luck.

“You tried all the places?”

He sits at a corner desk in his bedroom. He leans to open the bottomed largest drawing, lifting a basket filled with electronics from out of it. Rummaging and untangling, he pulls a palm-sized box converter with prongs for a Russian socket. “Here,” he says.

I think he is lending it to me so I say thank you and “I’ll return it at check out.”

I give him my thanks. This is the lesson.