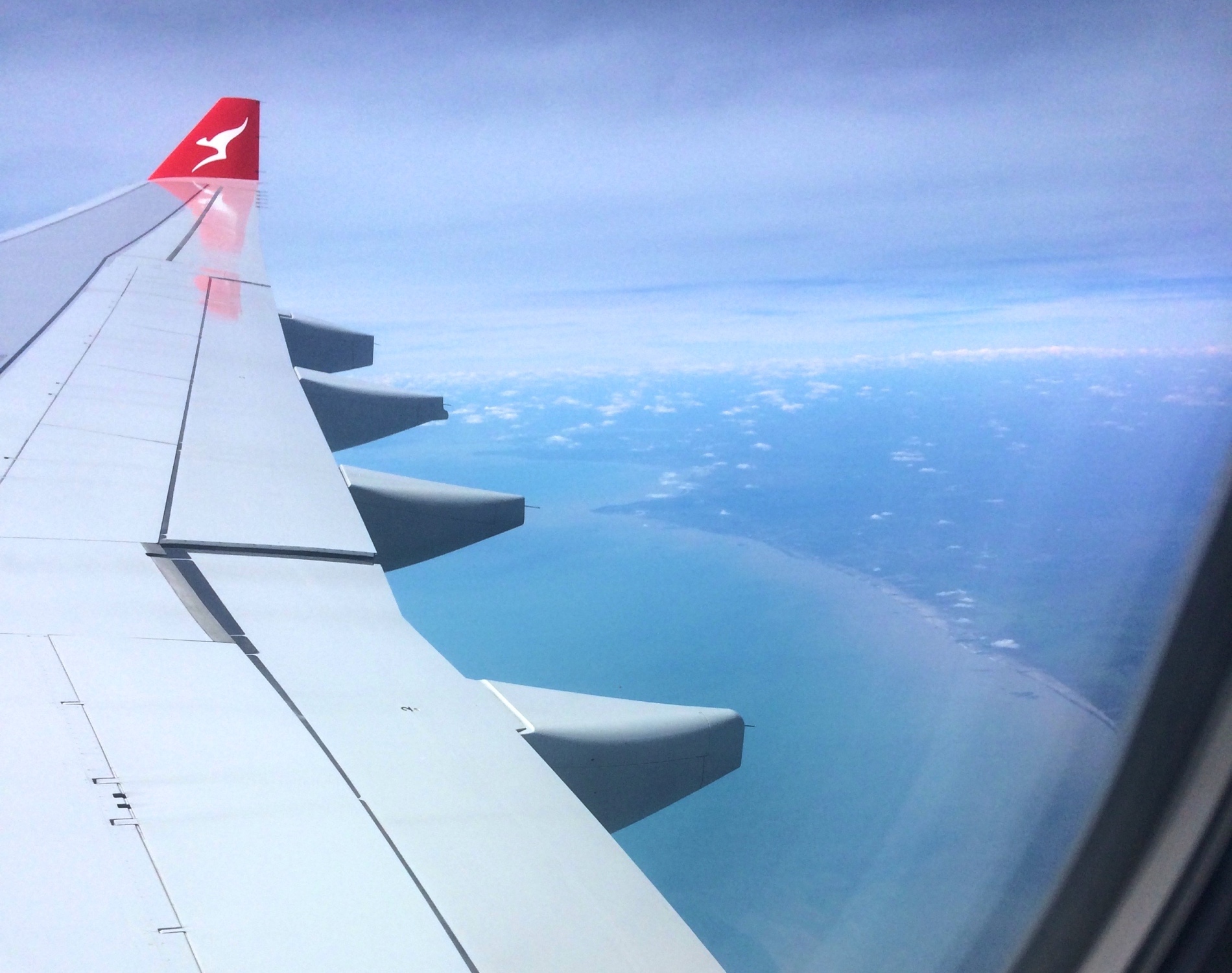 QF29, May 5—What city isn’t perfect at dawn? Give me a serene New York City like this and I’d love it. The bindings holding us to rules are slackened. A man with a trekking bag and backpack, his life’s belongings, can make an unprotected street crossing to reach Southern Cross Station. There, the massive water clock does not yet register six. The time is up Melbourne. My adoration for this place is complete, perpetual.

The evening before, I visit the Lui Bar on the 55th floor of the Rialto. I have a whiskey cocktail and then a beer. These have the right, airy effect, yet compound my emotions. I’m with an American girl who titles my quiet dirge in saying to me: “You seem sad tonight.”

I anticipated feeling worse about leaving. For a month I engaged in negative visualization exercises—imagining myself sobbing at the departure gate—and these have a positive impact. I feel a sense of finality, but no tears. Yet, even if primed for a brutal reminisce, Melbourne’s airport would have obliterated it with that grinding sequence of queuing that makes air travel misery. Flight check-in takes an hour. Three flights have been scheduled to go off at once, so the counter clerks are overwhelmed by passengers arriving the suggested two hours before take-off. Passport control is gravy, but security is a wreck. On the other side, I have five minutes when I expected thirty. I rush through breakfast and discover there are not enough restrooms. Nor any water taps. I arrive at the gate frazzled. The flight is delayed forty minutes.

I take Qantas. The name, an acronym, speaks to the service, which is spiffy yet comfortably provincial: Queensland and Northern Territory Aerial Services.

Leave it to Australia, frightened of being forgotten at so southernly a latitude, to cultivate such an incredible flagship airline. Australians regard it as abysmal. With considered reason, I say: they judge the airline’s domestic services. Qantas’s fierce proponents, count me among them, are familiar with the international routes. So, this is conjecture: Qantas gives disproportionate attention to foreign customers who have ample choice when picking an airline. This is how their reputation spreads.

I want to write but have no motivation. I stare out the window. There are clouds, mere flecks, spotting the sky above the desert. We fly north of Melbourne, miss Alice Springs and Uluru by hundreds of kilometers. A peek downwards in two hours will be as familiar as the peek downwards now. Cowl shadows mark hills. Mostly, there is ruddy dirt and plumes of tan from salt or silt. A few stacks of dust, paused by distance, bloom from an unseen vehicle. This is the desert sea that broke Charles Sturt.

A wayward explorer, Sturt was convinced that an inland (water) sea existed in Australia’s heart. The presumption was neither new nor unique: maps depicting such a sea were published and distributed as early as 1827. The man, Sturt, launched in 1844 from Adelaide an expedition that included a whaleboat of some twenty-feet with sail poles, rigging, and two sailors for steering. Within months, heat withered them, burned off their shoe soles, evaporated their water. Still determined, the expedition marched on, lugging the boat. His men jettisoned all non-essential items—save the boat—to improve their speed. After a year, Sturt developed scurvy. Only then did they turn back. He lamented, “I had as I have said no hope to whatever quarter I turned my eye. A country utterly impracticable—a creek from which it was vain to expect a supply of water.” He wrote later: “What are we to say to such a Climate and how is human foresight to calculate upon it? I know not…”

Now we fly over the northernmost edge of the Northern Territory. The Timor Sea is lustrous. I will arrive in Hong Kong in evening. I have three days there with my mother, who is meeting me before we trek to mainland China.