What You Should Know (Whether It’s Interesting or Not):

The driver pointed through our van’s windshield to a mountain in the shape of a lipstick tube. “Look,” he said, “Hollywood.”

I ducked in the backseat to get a view. Turns out the driver was making a joke. Bolted into the mountain’s rock ledge were four sentences, the last one, in English, read, “World Natural Heritage Phong Nha-Kẻ Bàng National Park.”

Calling the sign’s backdrop a mountain fits within the Webster definition of mountain in that it’s a natural elevation that rises abruptly from a level ground, yet it’s misleading because Phong Nha-Kẻ Bàng is not exactly an exhibition of a typical mountain range: there’s no cordillera, no sharp U created by glacier, no steady inclines with dirt and trees. The mountains are rock formations, ones unique to a geological phenomenon called a “karst region.” The landscapes are nearly lunar in their distinctiveness. Think Ha Long Bay, Li River, and, well, here. UNESCO in 2003 stamped the place with a World Heritage site designation.

Whereas mountain ranges are the crumpled protrusions of tectonic plates carved by weathering, a mountainous karst region is the product of dissolution, no tectonic plates necessary. Parts that were there are there no longer. Karst region rocks—limestone and dolomite and gypsum—are highly porous and react weakly to acidic water. The water cuts and grinds them and sharpens their edges. The landscape that this creates is lonesome mountains shaped like canine teeth. Jungle strains to exist on their vertical sides. Soil seems to have difficulty staying put. Water that cannot fully escape into subterranean caves is filtered free of clouding sediment and flows in plush, clear rivers. The National Park’s surrounding flatland is rich for agriculture, and the horsepower that drives it are water buffalo. These, on breaks, loiter in rivers, noses and horns above the surface, backs rippling the current.

Leonie (again, always Leonie with the planning) brought us to the region for its landmark feature: caves.

To a speleologist, Phong Nha-Kẻ Bàng National Park requires no introduction as it was introduced to the world in a grand way in 1991. A local man discovered what would be named Hang Son Doong, the world’s largest cave, which has a small country’s geological features all its own: a river, a jungle, a climate. A large town could cram inside, yet less than 1,000 people visit a year. Good on those people too, since it’s $3,000 for one of them to get the visitation permit, guide, gear haulers, and chef that are legally required for a visit. But I’ve seen the Descent, I’ve read Plato’s Cave, so I have neither the desire nor the funds to visit. I’m leaving Hang Son Doong for another life (or a sponsor’s checkbook).

To the budget wise and the casual caver there are Thien Duong (Paradise) Cave and Phong Nha Cave.

The Paradise Cave is as close to a Disneyland attraction as it’s possible to get in Vietnam.  A tour company (or private car or whatever) will drop you off at a big parking lot, you buy a ticket, you get shepherded through a turnstile that’s in a wall-less hut that belongs at the bottom of Splash Mountain, and then you wait in line with tourists who fan themselves, wear visors, and pull over-large sunglasses from fanny packs. One of those extended golf carts with the cushioned seating that really seems to accentuate the breadth your thighs when you sit on them comes down a paved road. People jockey for a seat. You realize that the only people who queued are British, Canadian, American, or Australian. For everyone else it’s a free for all. Elbows, hip shoves, the occasional stiff arm, are the instruments for order. You get in, people snap photos of the passing forest, white people apply sunblock. When you are dropped off you’re half-way to the cave entrance. The path up is a bunch of switchbacks. For some reason it’s all the tourists from Asian countries that decide the paved way is for the dogs: they cut through the near-vertical in between spaces. The nimble and lighter ones, the adolescents, bound ahead and then turn to their parents and grandparents with selfie-sticks extended as a way for the elders to grab ahold and get some assistance up. By the time you make it to the next switchback, they’re about two-thirds the way through their shortcut and clinging to exposed tree branches as a way to not bum ride back down the mountain.

There is a scene from Lord of the Rings when the Fellowship is just kicking around the Mines of Moria doing jack shit while Gandalf is figuring out which of three doors the group should enter. After a while he says, “Ah…that way..the air doesn’t smell so foul down there.” I’m here to confirm that that isn’t some trick made up for the sake of plot, it’s a thing. As we neared the cave mouth, the temperature decreased in increments. What was humid and dusty began to feel filtered, the air a chilly mix of morning, haze expunged, the air after rain that contains the slightest calibre of damp. Once inside, skin firming up, hairs standing straight as bolts, we didn’t want to leave.

Hat tip to the people who discovered this hole and decided to go down. Before engineers built stairs to descend from the mouth, any entrance would have been by repelling or by a failed jump-to-suicide attempt. The inside is massive, and there is a Hollywood amount of lighting and cabling. Purples, Leprechaun greens, Skittle yellows light up the cave like it’s the venue for a Ms. Frizzle approved rock concert. The formations of rock are massive and through eons have morphed into stone Rorschach tests: Megatron is there in side profile, a cartoonish Smaug peaks through stalactites, stalagmites could be either medieval weapons or pine cones, and (irony of ironies) Jabba the Hut is petrified as flowstone.

Most people stay near the entrance stairway even though a wood walk way takes you far inside. Farther in, the cave’s size diminishes only slightly, still wide enough for a highway. Few people seem to get that far, so, at the end, it could just be you twirling around, a deposit of minerals.

A picture of the entrance to Phong Nha Cave is below: a black notch swallowing a river. A boat is required for access. The same huff of cool air described above meets you at this entrance, but so too does one other thing: birds. These black specks whisk about outside, but only at the cave entrance, when the distance between you and them is shrunk, can you see the fan tail and boomerang wingspan of the swiftlet. They’re cave dwellers, and the majority of this colony roosts in the entrance grotto, which has a rounded ceiling like some stone Pantheon. The birds reside in nests made from the hardened threads of their spit. It’s a delicacy apparently. The nests are collected, made into soup, and pound for pound are as valuable as silver. (I just fact checked this paragraph. The swiftlet’s common name is the “Edible-nest swiftlet.” I’d like to submit a proposal to change “cow” to “delicious-sandwich cow” (This paragraph arguably belongs in the next section.).)

Phong Nha Cave is nearly five miles long, but boats won’t go that far. It’s still a fifteen minute ride to cover the 1,500 meters to the pinch-point that forces the coxswain to spin the boat around. The back and forth ride is an exquisite float trip through Earth’s wine-cellar. Oval entrances for dry corridors frame distant lithic spires. These appear to be the lone formations in massive and empty grottos. The caves and its many offshoots trigger the wish that every story about cave dwelling dragons be true, because in the glittery vastness any mythology seems possible.

What You Don’t Need to Know (but May Find Interesting):

How Vietnamese people deal with heat and humidity defies logic. Take me as the foil: when it’s hot or humid I reach for linen shirts, shorts I’ll go for board shorts, shoes let me go sockless, I wear a hat, and my attitude is less is better. (I’m aware that with this ensemble I’m a walking body odor bomb.) Also I wear a pharmacy’s worth of sunblock (specifically, Leonie’s sunblock). By no means would I consider myself an outlier. Western tourists opt for muscle shirts, wife beaters, tank tops, flip-flops, and short-shorts. Now, take the Vietnamese woman who paddled our boat to Phong Nha Cave. Firstly, in looking at her—petite and lithe with hands and feet so small they were the size of sparrows—I should be forgiven for being in awe at how deftly and for how long she was able to feather and push the long, thin wood paddle that ushered the boat forward. A body pulse, like a snap in its quickness, pushed the handle fore and the paddle aft. Her body barely checked when the paddle spanked the water at the catch. It was her outfit, though, that shocked me. Her clothes were entirely dark. For her top she had on a black turtle neck with each sleeve barrel pulled over a hand. A notch was made in the seam to allow for her thumb to hook through. She wore tight blue jeans, and, on her feet, white socks and thonged sandals. A face mask covered her face except for her forehead and eyes. Covering her head was a conical straw hat. It is ubiquitous, this headware, and completely necessary, not just postcard couture.

Before you yell at me that of course this lady would wear long clothing, as even putting on sunblock every day would not fully negate the sun’s harmful effects, let me say I know. But what I want to understand is how many years of adaptive tolerance are underneath those cotton layers. I complain like I’m wearing the weight of a thousand sheet metal roofs when I put on so much as a sock and it’s 100F/38C out. I watched her while I sat underneath the shade of a tin roof and waved my hand at my face to add to a vague river breeze. If she had passed me the paddle and said do a power ten, I’d have keeled over and been sinking in the water within five.

On Son River there is a curious aquatic culture that I didn’t get any information about. Numerous hand crafted wood boats floated in what appeared to be their own unmarked territory. Men in the bow with knives in hand hacked at submerged plant life and heaped stems and leaves in the hull. I don’t know what the plant was nor the purpose for its harvest, but the practice was widespread enough that I’d say it was an important part of the local lifestyle. If you’re reading this and have any clue as to what I’m talking about then drop a line.

Parts of the movie Kong: Skull Island were filmed in caves near the park.

What You Don’t Need to Know (and Won’t Find Interesting):

Leonie bought her first ice cream of the trip, and I bought my sixth sugar cane drink. 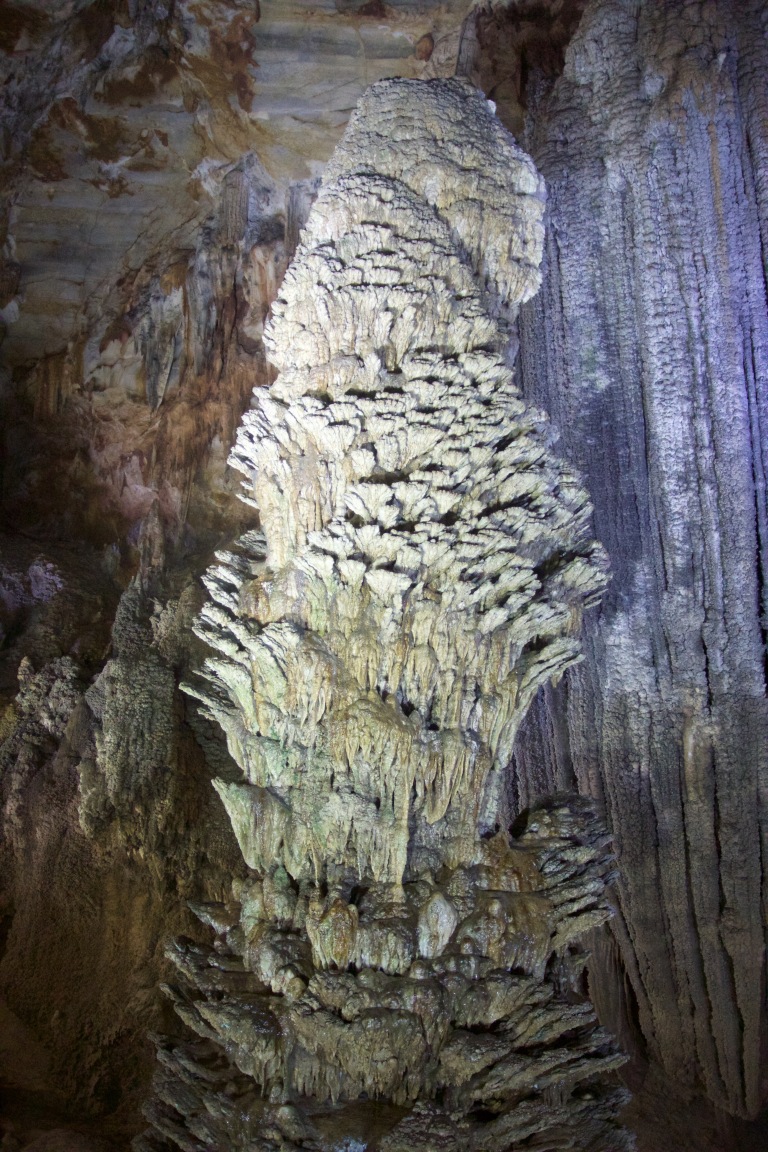 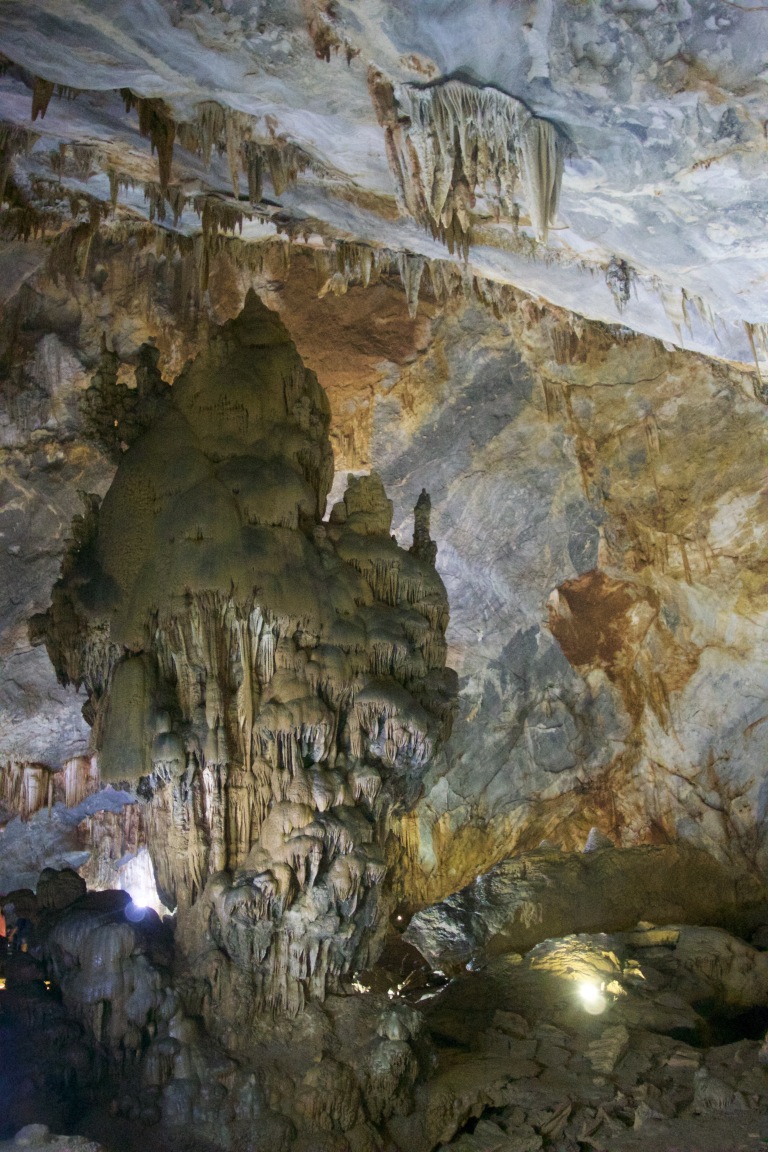 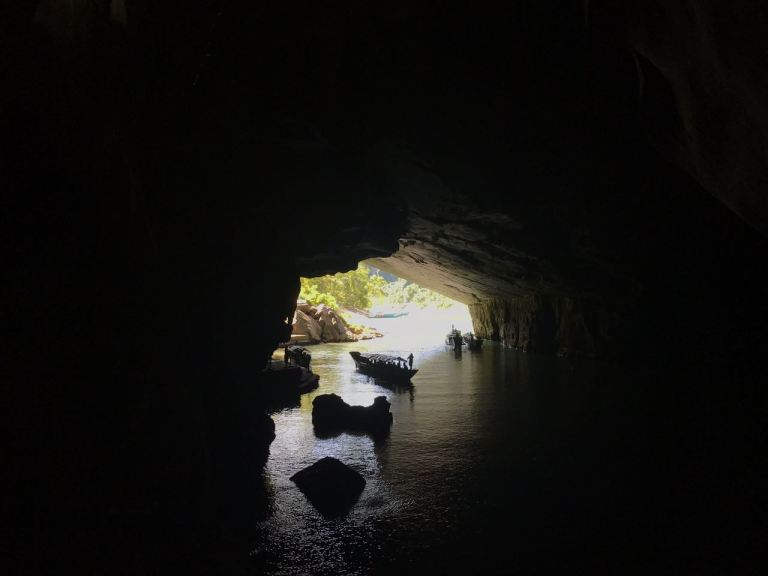 ←Next: Vignettes from Hoi An: Vietnam’s Most Charming Town

Previous: This was Bound to Happen: Bali Belly and a Bathroom Tragedy in Mui Ne →