“For when you arrive I’m going to get you a shirt that says ‘I’m not his girlfriend.’” I told her.

“Or a pair of hats that says, ‘Not a couple.’” She responded.

“Perfect,” I said, knowing both of us well enough to know we’d end up doing nothing.

Manya landed in Auckland and when I picked her up we experienced absolutely no issues whatsoever: There was no way I pulled over and picked her up in a no-passenger pick up zone and incurred a $300 fine; zero chance I got into a yelling match with two traffic cops about the lack of signage; and an absolute fiction that Manya discovered she’d unknowingly brought a prohibited item across customs that she would have (if she did bring said item) disposed of in a biohazardly responsible manner. Absolutely none of the above or anything else happened. Flawless, flawless pick up.

Manya was in her black cotton outfit with wool sweater and jacket and black sun hat and run-free black tights and white lace and tan-soled shoes, me in whatever I was wearing that day. We walked over rocks, on sand grains that were like the crumbs shed from old French baguettes, and hillocks where trees could not root. Manya held onto all parts of her body, but what held her down? “I can’t make it!” She yelled, so we ran across private drive ways and mowed lots and ended up right back where we started from. Then we went to drink wine. 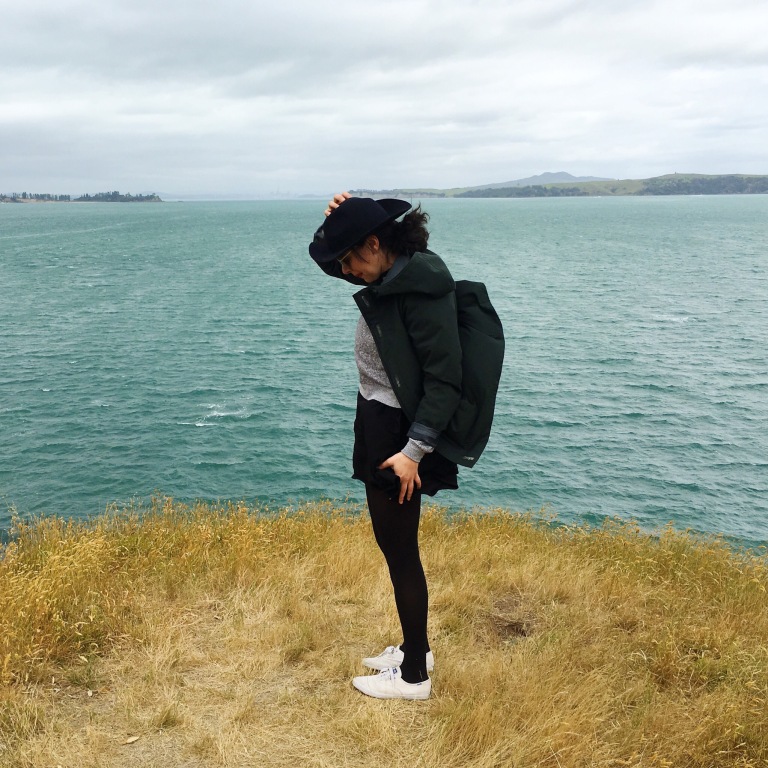 An old mad potter drank two bottles a day,
But with no where to put them he tossed them with clay.
One day while potting this thought hit his mind:
I have a mountain that I love to climb,
If ever there was a way to hold it back,
I bet I can lay on it my very own train track!

So that’s what he did, for five and a score,
And what he accomplished is part of lore.
He laid down train track, just a mite wide,
And it goes in steep switchbacks, all up the mountain side!
The dirt he held back with empties and bricks,
And at times you hang off the mountain, it gives you the shits.

It ends at a view point called (lol) Eyefull Tower.
That space you can rent out by the hour.
People bring up their own booze to get drunk and loose,
But coming down they pass out in the miniature caboose.
Manya and I went and had loads of fun,
Just look at that face; son of a gun! 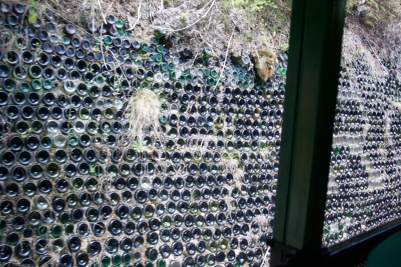 “You are so close to the side of the road right now.”

“I need to look good though, one sec.” 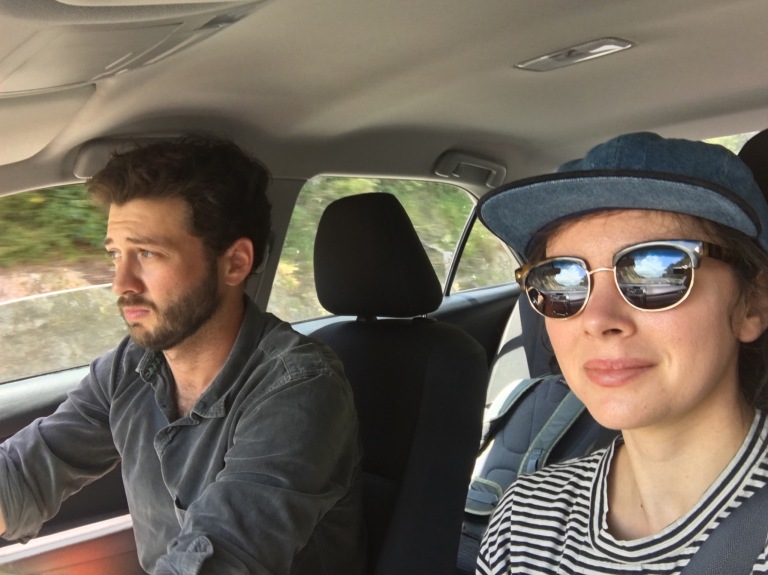 Alabaster and tan, flabby and fit,  juvenescent and senescent bodies congregated like African wildlife at water pools. A sign that said “Danger, Very Hot Water” was put out.

Some of the thermal pools that had been dug into the sand positively boiled. Others were a wee bit too cold. And still others had the patchy warmth of soup just out of the microwave and not yet stirred.

“I can’t believe this exists,” Manya said as we poached from some other tourists their Goldilocks perfect pool and bobbed in the shallows like tardigrades. 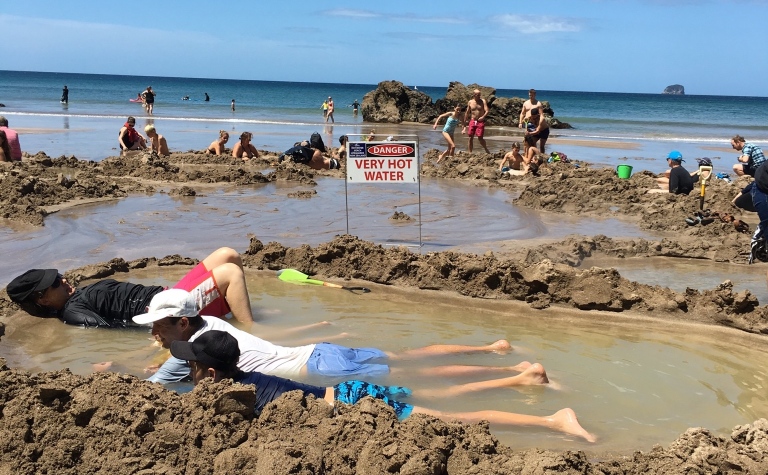 VIII. Manya Hiking In Her Element

In the aptly named Hooker Valley, where Manya could spend a day, or a week, or a few years or even a life, rain at first nibbled our rain gear then pecked it then soaked it while wind threatened to pick us up in its maw. Manya jibbed and tacked on the walkway.

“Not the only thing that can blow, huh, Manya?”

IX. This Is Fine.

Milford Sound is a fjord and the Eighth Wonder of the world, apparently. Manya and I booked a cruise that required a bus there and back.

Morning of I woke up with an unexpected medical emergency. “I can’t go,” I told Manya.

Medical emergency dealt with I picked her up that afternoon. “How was it?” I asked.

We kept driving. She looked at the craggy limestone crown the Remarkables made that commandeered all sight and was laid over with a snowy veil. “These mountains are cute,” she said.

How a Catholic Basilica ended up a minute’s drive from Timaru’s fruit-by-the-foot long downtown street is anyone’s guess (but also answerable with a Wikipedia search).

Its knave was done up with Christmas preparations. The Christmas Eve mass was to begin in a few hours. Manya and I walked quiet and austere through the pews and dropped a dollar coin to light one of the white-wax votive candles. What prayer we gave echoed the one we’d come in with. We had spent the previous hour lounging on sequin decorated velveteen pillows while sipping apple tea and eating lokum under the gracious hospitality of a Turkish expat. “My kids are in Canada,” he said, “I miss them most on holidays, but always very much. Now that I am old I see how much family must be together.”

Christchurch is a bombed out, run down, concrete rubble, ash pot city that the gods left. And in their haste to evacuate, their gigantic footsteps over turned stones and crumbled rooftops and left massive cracks in the Earth, as wide as the gap between money owed on the mortgages of destroyed homes and the insurance pay outs given. The most secure businesses are temporary chain link fence providers and warning sign makers. Set designers from the Walking Dead might have come here to get a sense of the show’s ideal mise-en-scène.

“We might have made a mistake,” I said while driving to the house I’d agreed to house sit over the holidays.

“But there will be dogs,” Manya said, referencing the three canines I’d also agreed to watch.

When we arrived, and the mighty emptiness of our location fell on us like an eclipse, Manya said, “Maybe we need to make a Christmas photo to cover up our crippling isolation.” 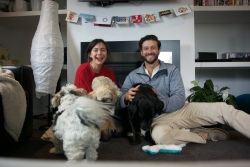 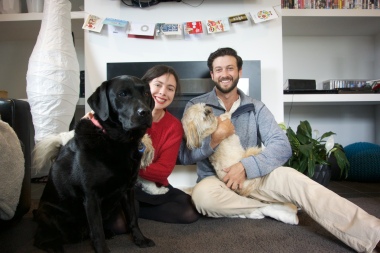 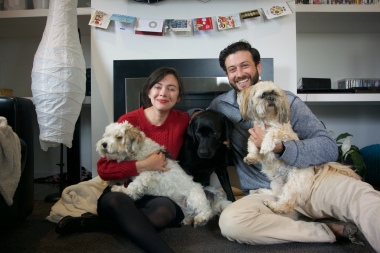 “Hi, I left my camera, hat and dignity somewhere.”

One thought on “Manya Visits: Anecdotes, a Poem, and Photos”