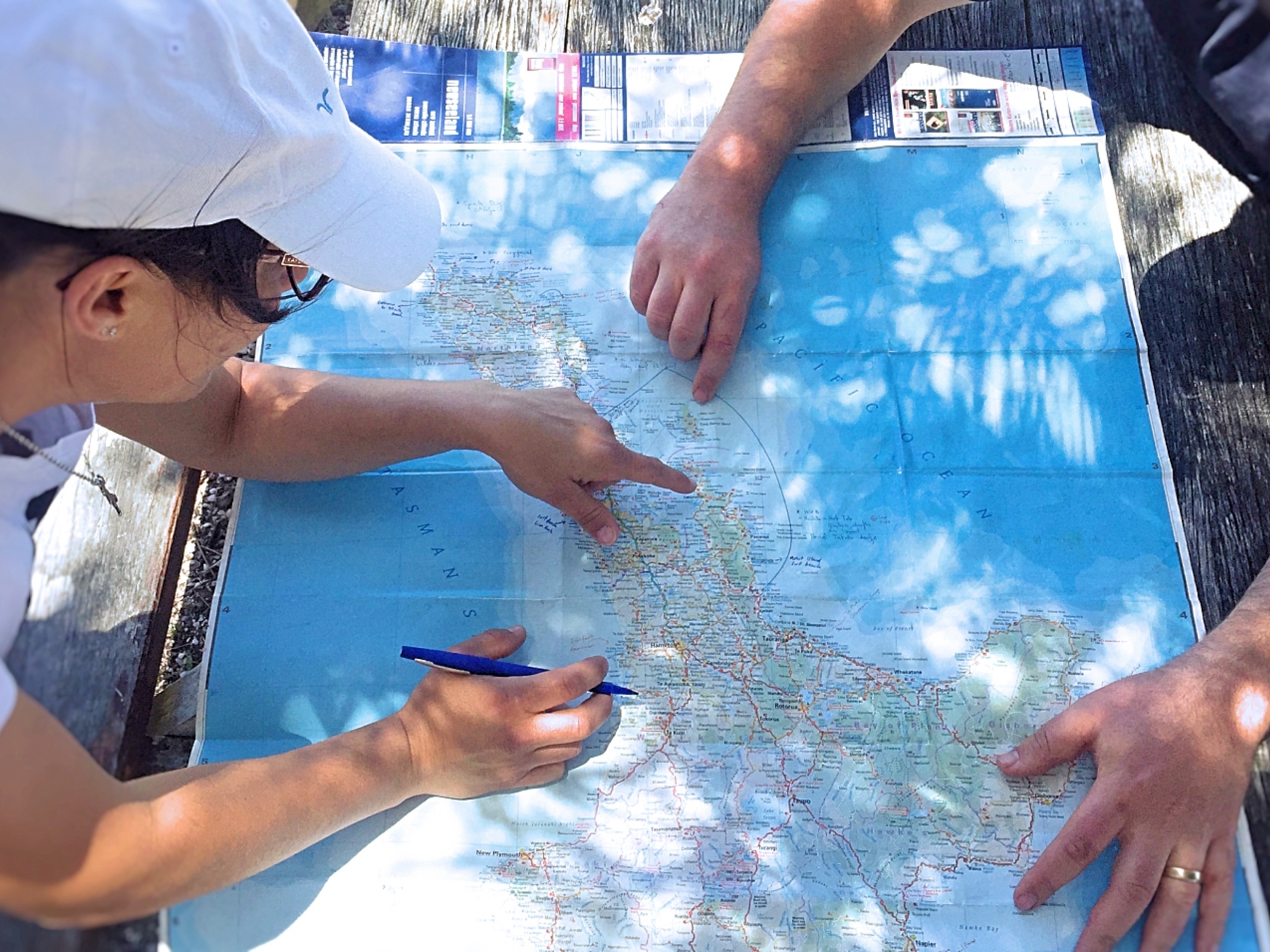 Contrived ignorance opens doors in a foreign country. I’m not being purposefully manipulative, but I notice locals love to work out the helpless quality that sticks to inexpert foreign travelers, and this tends to lead to new avenues of exploration or allow for locals to demonstrate their local and organic hospitality. Examples: While in Auckland I needed to make an appointment with a personal banker to open a bank account. I went into a branch to explain that I failed to make an appointment but was wondering if I could talk to someone now. The woman I told this to said, “Let me check my schedule. I might be able to help you.” I had a functional bank account within twenty minutes. Needing to take a bus but unable to purchase a ticket online, I asked the intercity bus driver if I could purchase from him. “Where are you going?” “Rotorua.” “Don’t worry about it, just get in.” This is not a uniquely New Zealand phenomenon either. When I was in Istanbul I sat at one of the squat, square tables near the fish sandwich stalls that bookend the Galata Bridge. The kid across from me was snacking, so I asked him what I should order (there was one sandwich option). Instead of advising he hailed a waiter and ordered a sandwich and cup of pickles for me. I reached to pay but he held his hand out and waved mine away from my wallet. “No,” he said, pulling lira from a pocket, “You’re guest.”

After Paihia I again drove north and then separated from the highway to follow a scenic road that wrapped around a thumb of land a girl I’d met in Waipu suggested I see. Like all roads here this one was like a jumbled then floor-tossed thread, all loops and ups and downs directed by the land’s uneven topography. Near two I said enough driving—it was a pristine day and I’d left Paihia early—and looked for a camping ground. This sort of tow-your-bed-wandering is remarkably pacifying since familiar comfort is literally a break away; the sole decision is determining what view you’d like to park your bed in front of.

I came upon a campsite in Matauri Bay. The bay beach is the bottom floor stage to a natural amphitheater. The westward land forms a kind of half-bowl whose rim is made of sharp ridged hills, and on the declivity are the initial stages of a vacation home development (e.g. paved cul-de-sac roads and marked plots) that threaten the bay’s sense of isolation. There’s not exactly a sustainable infrastructure for a vibrant community though—the nearest business is a combination petrol station and dairy (what Kiwis call convenience stores), so any community would be founded on quiet, water, ocean views and personally imported groceries.

The view I chose was a sucrose sand beach with a two conifer frame. At low tide water cellophaned the sand bar so I was able to walk dozens of meters through knee-cap numbing surf and explore the small chambers and miniature beaches carved into the volcanic rock cliffs that extend into the bay. A collection of lean-tos were at the south end (kind of a hamlet? Maybe?) and had all the feeling of the land beyond where the light touches. There were cars that looked abandoned and trailers in varying derelict states, some with busted out windows, otherwise with partially collapsed roofs, yet all had evidences of habitancy and once during my stay a 4×4 truck sped from over the protective dunes and drove across the beach shallows. I noticed children lying in the truck beds, their (the children) faces all smiles as they shielded themselves from salt spray. 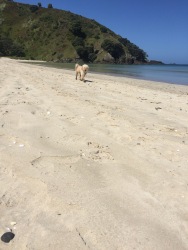 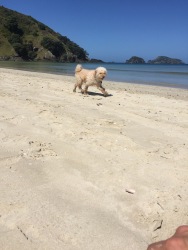 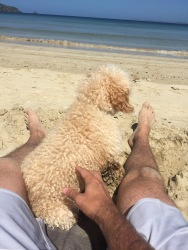 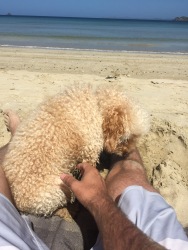 I hiked a hill and stopped at a flat viewpoint half-way up to talk to a couple gazing over the edge.

It’s time to meet Jo and Steve. Jo is an urban planner now on maternal leave to care for a boy who looks like he’s already shredding gnar and considering a Rip Curl sponsorship (the boy wasn’t there, Jo showed me pictures at my prompting). Steve is an engineer and was scheduled to depart the next day on a charter to a more northern peninsula to perform land surveys for a developer client. Jo and Steve reside in Auckland but decided to tack two vacation days to the fore of Steve’s assignment so Steve could scout free dive sites.

Free diving is Steve’s pastime, so Jo was tagging along to break from motherhood demands though she is not a free diver. She grew up in warm weather Coromandel and was disturbed by the very idea of touching a toe to the water she was checking out, though the trip had a nostalgic tint since Northland was her childhood vacationing spot and she had not been in over a decade. Steve on the other hand looked padded for both warmth and buoyancy. He had a fox red beard with the typical lighter hair patch on the chin that I think is endemic to beards. Of course his hobby was on my mind as I made notes to describe his appearance, but his clothes looked to be a diver’s clothes: blue t-shirt and trucker’s hat, the diver’s characteristics being the permanent fades in each of them from long, frequent exposures to unshielded sun. Each time we stopped at a view point Steve was quiet for whole minutes while peering at the aqua blue puddles amidst the darker shapes of shallow rocks in the water. “I want to be in there so badly right now,” was his constant refrain. At one point he rattled off a biologist’s roster of aquatic life viewable in the shallow pools. Rock lobster and octopus are the only ones I remember since they were the ones he used neither the taxidermic nor Maori names for.

I asked if the water was warm (I’d yet to go in and it certainly looked warm). I swung my head to indicate the bay where two winter-white bodies free stroked in shallows. “Water is cold,” Steve said, “And they could be Germans since they swim in anything. We were in South Island once on a boat with a bunch of Germans who jumped in and played around so Jo thought it’d be fine to follow. She hopped in and just about ran on the water to get out.”

We summited the hill, which turned out to be host to a pilgrimage site for those keen on environmental activist history. A memorial commemorating the Rainbow Warrior is built there. The memorial is an inverted catenary of beach stone with an iron bar as the y-axis on which is fixed a four blade propeller, and the memorial and neighboring wood bench seating overlooks the water channel where the RW was scuttled. The brief history is that the RW was Greenpeace’s flagship, once harbored in Auckland and there sabotaged by French secret service agents as retaliation for Greenpeace’s outspoken activism against France’s nuclear testing. The sinking killed an Italian photographer who was unexpectedly on board. The French officers were found, tried, and sentenced and now hold the dubious honor of having one of the most stellar “truths” to use in the two truths and a lie game: “I sunk the Rainbow.” The vessel was salvaged and scuttled in the bay to create both an aquatic sanctuary for diving and the GPS coordinates to determine what location, exactly, Israel Kamakawiwo’ole and Judy Garland were singing about. 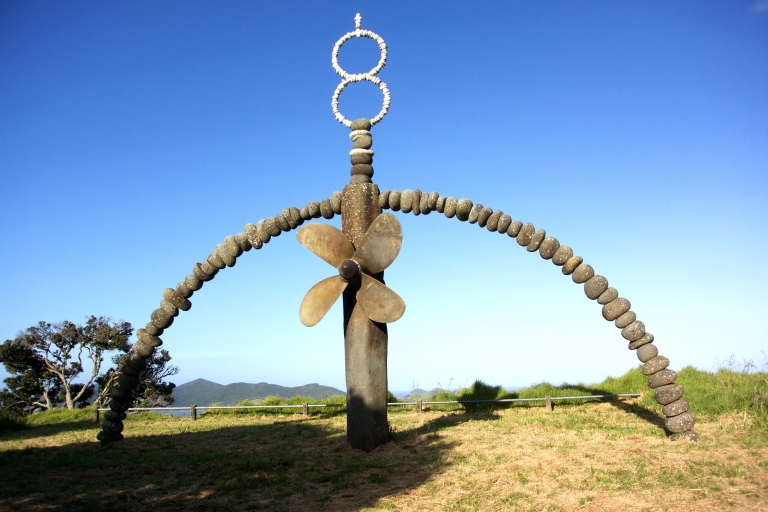 On our way down, Jo asked what my plan was for my trip. “I don’t have one. So far I’ve been living day-to-day doing whatever someone I met day of or day before tells me to do.”

Jo looked to Steve and said, “I think we can help him out.”

Back at my van I took out my New Zealand map. Until that point it was a bit of a relic since I’d gotten accustomed to Google Map’s hands free directional announcements, which was extra handy considering the quick turning roads I was driving on. (Plus—little trick when you’re in a data-less or infrequently serviced country—if you input a route on Google Maps you can turn off data and GPS will still track your coordinates along the highlighted route.) Jo opened my map and said, “Looks like you have some places marked already.” The map’s previous owner (a.k.a. Ruth’s former owner) had given me his map. He had noted points of personal interest. Diving and surfing sites were particularly subject to a “Wow!!” or “Gorgeous!!!” (Gratuitous exclamation marks are his). Jo and Steve took places opposite one another on a picnic bench. She rarely looked up while she handled her pen, hovering it over both main islands. She made marks for worthy dining options or scenic vistas or particularly lovely campsites. Steve circled Jackson Bay, a South Island town noted for crayfish (a.k.a. rock lobster), and gave me the vague rundown of how to get there, “You take this road, see here, it’s a small town you’re going to so you just keep driving until you see a converted railcar, that’s what it is, a guy sells these cooked crayfish out of there. It’s forty five minutes off the main highway, but it’s worth it.” Each notation had an accompanying story from their personal history, essentially undoing my ignorance one story and pen mark at a time.