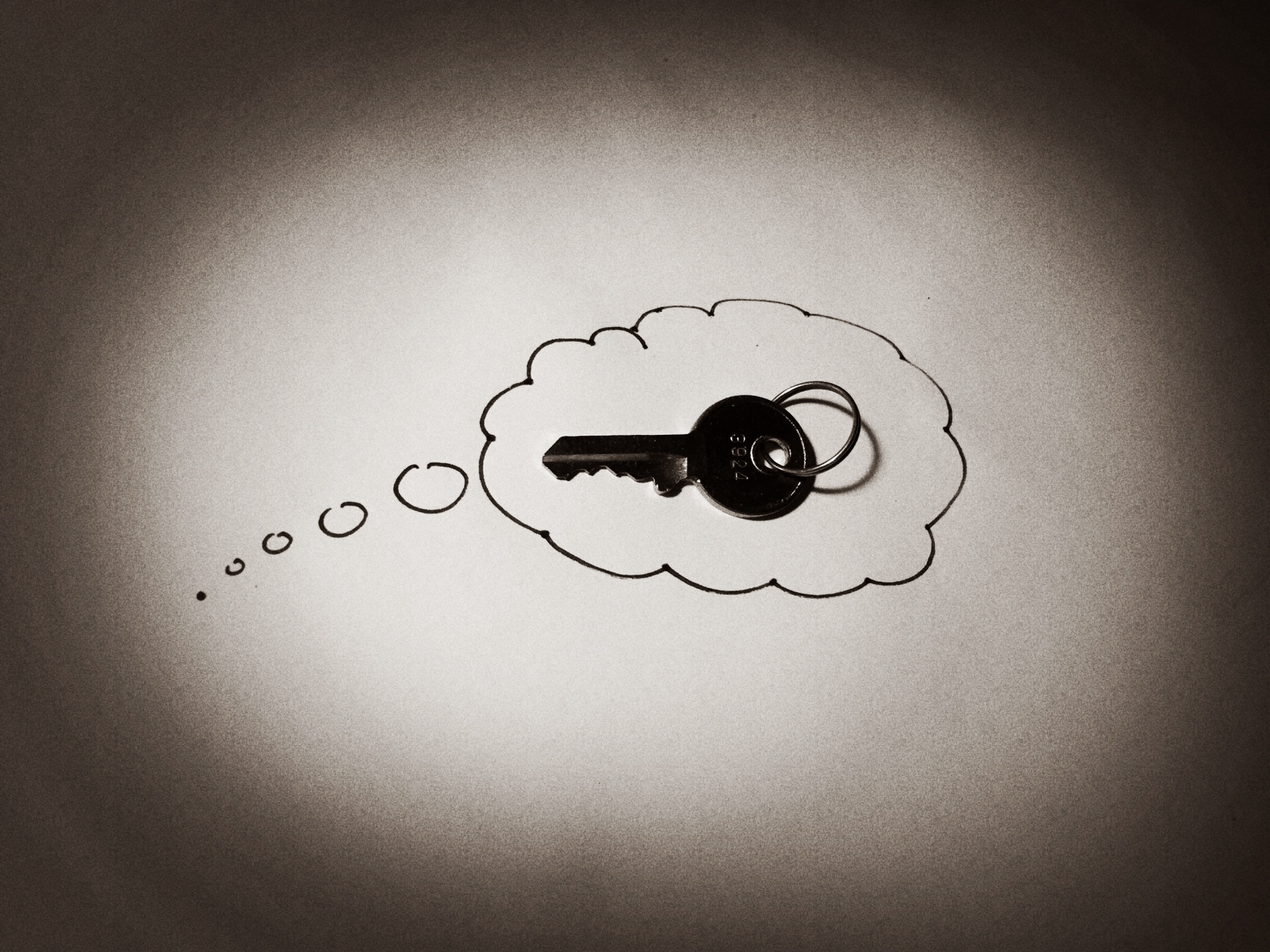 I do not own keys.

Since I’m a lawyer by training I’m incapable of letting any claim stand on its own, so I need to slice that one up with some ambiguity and redundancy to present a more whole truth:

I do not currently own keys, though I am actively dreaming of my next set, and I have in the last sixty-one days possessed the keys to three different living spaces/apartments (though I have relied on the goodwill of ten people for lodging).

There is nothing particularly disorientating about physically not having keys. A familiar token is suddenly out of your trouser pockets and what that mostly does is bring a sudden pang of terror whenever you put your hand in that area and do not feel a key’s hard shape. That feeling wanes remarkably fast, so too does your ability to remove “keys” from your home departure’s mental checklist. But since keys are patently symbolic (e.g., home closings are finalized by the transfer of keys; cars are often gifted via keys tucked into plush boxes; the removing from the keychain and then slamming of an SO’s apartment key onto said SO’s dining room table, etc.) and the objects to which keys are metaphorically chained are likewise bloated with symbolism (e.g., from the above list: obtaining a home is a symbol for achieving some sort of American dream, etc.), not owning keys suggests I am in a sort of existential limbo. To me though, not having keys means there’s no geographic place that is mine, no physical space that has an address, or no pounded part of the world that is as familiar with me as I am familiar with it, nothing bordered or walled with an in-between space that is a me-zone. Keys mean comfort to do uniquely me things. I can shower with the door open and sing and wash using my brand of soap. I can leave dishes in ziggurat-type towers, and I can think nothing of watching eight straight hours of Malcolm in the Middle while wearing only boxers and eating only Annie’s cheddar mac & cheese with a bathtub’s amount of Cholula mixed in.

I’m not “homeless,” at least not in the socioeconomic tradition of the word. I have a community of friends and family that are either overly generous or overly gifted at extending hollow invitations that they are shocked to see accepted. So in the past two weeks I did possess two keys, one at a time for two different apartments. Both were loose (as opposed to on a keychain) Ace-brand keys, both I tucked into the tightest pocket of my wallet, right behind an obsolete health insurance card, because of each key’s obnoxious tendency to fall out.

Being handed a key to use at another person’s home is also an invitation to a place of nuanced etiquette that hosts may not be aware of. As a simple starter example: At my aunt’s house should I have used her shampoo? I don’t know. It looked luxe, the kind that is made domestically but eighty percent of the instructions are in French. At my friend’s house for a quick rinse and dry could I obviously tell which soaps were his? Was he a Dr. Bronner’s Peppermint hemp soap kind of guy, or was I reaching for his non-consenting roommate’s bottle of Suave, which had a watered down, thimble-full amount of soap left?  Did the “you can crash at my place” package my friend offered include using a negligible pearl of his Kiehl’s face lotion as part of my post-shower exfoliation, or was I strictly limited to the allocated “crash” spot? (And relatedly, is a person allowed to impart their routine on the host? Meaning is there an assumption that the guest is allowed unfettered access to a morning routine that may consist of, say, popping in a yoga DVD and welcoming roommates with a morning lotus pose?) At what point (if any) during a stay am I allowed to explore the host’s cabinetry to find a cup? Am I even allowed to open the refrigerator if I’ve bought nothing in it? If there is the universal understanding that a day guest has full privileges to a sink’s bar soap (or, if in a Millennial’s bathroom, liquid soap), does that open the door for a night guest to have full privileges to shower-specific toiletries? Those are of the same ilk, only used in a different location and for different appendages.

Luckily my friends and family are well-meaning and kind people. There was no need for me to be constantly tuning my ear to recognize some signal that suggested I overdid my stay. That having been said, living within amorphous guest rules makes you sensitive to the tenebrous unbalance you’ve brought to an established home. I thought I could perhaps credit some good will by without prompt doing the dishes or sending a random mid-day text to a head-of-household to say I was heading to the grocery store and that I could “pick something up if you needed it.” I also did not want to be in a situation where I was giving a gift/token of gratitude at the end of my stay, and that token would retrospectively atone if I overstepped my bounds during my actual stay; part of what makes a pleasant guest experience is having the crystal clear knowledge that you have not reneged on your obligation to not fuss and fuck with the host’s goodwill.

It is a tiring and oddly humbling experience not having a set of keys, and that is partly my reason for being excited for my next set. The hope and determination is to have that set as soon as November 11th. I envision that those keys will belong to the ignition of a Toyota caravan. A campervan, essentially. Flat fronted and under 5 meters with a slate gray paint coat and a 3.2 liter engine. There are at least three seats in this van, and an ample dashboard. On the passenger side dash there is a flat, depressed space, one that I’ll fill in with bunny eared maps that have felt-tip-drawn circles around the red-place names and blue-stenciled rivers. There will be a bed in the back, comfortable of course, but within the comfort spectrum that one can reasonably expect from a campervan bed sold in a foreign country. And underneath the bed, in the van’s storage space, will be a Coleman portable cooking range with two burners that I can hook to a propane tank. (See, the problem with my imagination is that it takes place an ocean and a continent away from where I intend to buy this campervan, and I do not know if the portable cooking ranges they have there are Coleman the way they are here. I imagine that they are not.) That the van’s transmission must be automatic is non-negotiable. My aptitude with a stick and a clutch is suboptimal, and there is the added wrench of needing to familiarize myself with a switched passenger/driver side and lanes opposite what I’m used to.

That I am thinking of buying this van at all is a source of chastisement, especially among my most image-minded friends. One in particular, a former co-worker, is adamantly against the purchase and would always say with tilted head worry, “You can’t get a campervan, people will think you are a child molester.” Luckily an Australian partner always responded, partly to assuage her, partly to convince me, “Vans have a different rep over there.”

I know I cannot buy this van sight unseen. I need to get at least a test drive in and a look under the hood, a kind of learned-from-the-movies-hand-fingering-furrowed-chin-as-if-I-know-what-I’m-looking-at look. And the fact that my first time driving a New Zealand car on New Zealand roads will be in a test drive situation is not lost on me. I am already fearful that this likely $8k+ vehicle has a firm “You Break It, You Buy It” rule for all test drives, and that I’m pedaling into a chance to empty my savings to cover medical bills for multiple people.

Auckland, New Zealand is the place to buy, apparently. The turnover of internet and used car lot listings is so frequent that most dealerships don’t post pictures, instead they say, “Come visit us for the most current.” Why Auckland is evident if you take a quick look at international flight patterns: It is the common disembarkation and departure point for the people who want to see (or finished seeing New Zealand). The ones who, like me, have been through the brochures and followed state sponsored IG accounts and know that New Zealand is abundantly accessible by car, that it demands, even, to be seen automotive-ly.

I know that the car needs a warranty of fitness, a mechanic’s check, and a title of ownership transfer that requires that I have a New Zealand bank account, but in my mind—my midnight and early morning imaginings—all that has already happened. In my mind I have my Toyota caravan, and I’m smiling because it’s the initial step to realizing a dream that I passed the Rubicon on about sixty days ago, back when I had a series of Christopher McCandless’s type of privileged, anti-hedonist moments: I sold my chaise lounge couch, sold my obnoxiously large TV, gave my toaster oven away, met the girl I saw toting the red barn chairs I abandoned in my apartment building’s basement, saw on-sale the humidifier I gave to Goodwill. Three years earlier I’d been glad to buy the pleated Brooks Brother’s dress pants, herringbone gabardines, Ledbury dress shirts, seven Christmas stockings worth of dress socks and two now worn out dress belts that I ably fit into two garbage bags for donation. The main corpus of what I still owned was a green 52 liter Eddie Bauer roller bag so filled with stuff that I had to use my well-adapted-to-sitting lawyer’s ass to compress it down to zip while I prayed I was not damaging or in any way materially detracting from the integrity of the contents. That bag or the stuff isn’t in my imagination though. It’s really just me, the Toyota van, and the newest set of keys.